Did the Disciples Steal Jesus' Body?
And when they had assembled with the elders and taken counsel,
they gave a sufficient sum of money to the soldiers and said,
“Tell people, ‘His disciples came by night and stole him away while we were asleep.’And if this comes to the governor's ears, we will satisfy him and keep you out of trouble.”So they took the money and did as they were directed.
And this story has been spread among the Jews to this day. - Matthew 28:12-15, ESV
Matthew wrote his Gospel for a Jewish audience. When he wrote his Gospel, Jewish people knew three things about the supposed resurrection of Jesus:
1. Jesus' closest followers claimed He had risen from the dead and ascended in to heaven.
2. Jesus' body was not in the tomb and had never been found.
3. The story circulating among the Jewish people was that the disciples had come in the night and stolen the body.
So, what about it? Could the disciples have come in the night and stolen the body? Consider these questions:
1. How would a scared and untrained group of fishermen and a tax collector come in and steal a body from a sealed tomb while a guard of professional soldiers slept? This required moving the large grave stone and removing the body, all in total silence in the middle of the night. How?
2. Why would nothing be done to punish these soldiers, if indeed they slept while the body was stolen? Wouldn't the very fact that they went unpunished prove that their story wasn't true?
3. Why would the authorities be unable to discover what the disciples had done with the body? After all, the Jewish authorities and the Roman government both had good reason to want to be able to prove that Jesus was still dead.
4. If the disciples had stolen the body, would they have kept up the lie of the resurrection when Stephen was stoned to death and James was killed by Herod? Don't you think they would have given up the conspiracy once it started costing them their lives?
No, the most likely explanation is that the disciples had courage in the face of death because they had confidence in the resurrection. Their confidence was grounded in the fact that they had seen Jesus after He had risen from the dead and had later seen Him ascend into the clouds. Nothing else adequately accounts for the disciples' courage and consistency in the face of death.
Before He left them, Jesus charged His disciples to go and make disciples. Once the Holy Spirit came at Pentecost, that's exactly what they did. Within a generation of the resurrection of Jesus, the disciples had taken the Gospel from India to Spain, from Ethiopia to Rome. Do we have their same confidence and courage? Are we taking the Gospel to our world today?
Prayer Based on Psalm 66:
O Lord, You are worthy to receive praise with joy from all the earth;
all nations and all peoples should sing the glory of Your name;
and give to You glorious praise!
O, Lord, let all peoples say to You, “How awesome are Your deeds!
So great is Your power that your enemies come cringing to You.
You completely subdue all Your foes under Your feet.
All the earth worships You
and sings praises to You;
they sing praises to Your name.”
We can see and we must proclaim what You have done:
You are awesome in Your deeds toward the children of man.
You turned the sea into dry land;
they passed through the river on foot.
You conquered sin and death in the death and resurrection of Your Son,
freeing Your people from guilt, condemnation and fear.
At the foot of the cross and at the empty grave, we rejoice in You,
for You rule by Your might forever,
And Your eyes keep watch on the nations—
let not the rebellious exalt themselves.
Lord, we Your people bless Your name 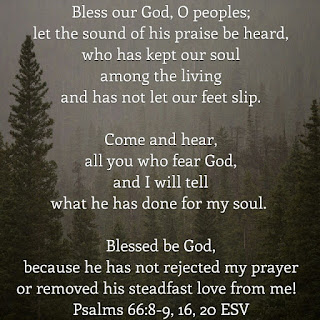 and sing and tell of Your praise,
for You have kept our soul among the living
and have not let our feet slip.
For You, O God, have tested us;
You have tried us as silver is tried.
You brought us into the bondage of sin;
You laid a crushing burden on our backs;
You let Satan torment us with guilt and shame;
we went through fire and through water;
yet You have brought us out to a place of abundance,
into the freedom and joy of being forgiven and adopted children of God.
I will come into Your house through the offering of Jesus in my place;
I will perform my vows to You,
that which my lips uttered
and my mouth promised when I was in trouble.
I will offer to You my life as a living sacrifice,
and the fruit of my lips as a sacrifice of praise,
giving thanks to You who have saved me and who keep me.
Father, give me the grace to tell those who fear you,
what You have done for my soul.
I cry to You with my mouth,
and high praise is on my tongue.
O let me not cherish iniquity in my heart,
but let me hate my sin as You hate my sin,
and hear my prayer as I seek Your face.
But truly You have listened;
You have attended to the voice of my prayer,
which is why I have confidence to come before You,
only because of Jesus and what He has done for me.
Blessed be You, O God,
because You have not rejected my prayer
or removed Your steadfast love from me!
Though I have rebelled and stubbornly resisted,
You have remained faithful and have persistently called, restored, forgiven and reassured me.
I praise You, Father, for such persistent and overcoming love!
Posted by Jason A. Van Bemmel at 10:19 PM