[Nerd Note: This is the 176th post in Walking with Jesus in the Gospels and Psalms. That's equal to the number of verses in the longest psalm in the Bible, Psalm 119.]

Was the Triumphal Entry a Failure?
And Jesus found a young donkey and sat on it, just as it is written,
“Fear not, daughter of Zion;behold, your king is coming,    sitting on a donkey's colt!”
His disciples did not understand these things at first, but when Jesus was glorified, then they remembered that these things had been written about him and had been done to him.
- John 12:14-16, ESV
Large crowds gathered around Jesus and praised Him. They cut down palm branches and shouted, “Hosanna! Blessed is he who comes in the name of the Lord, even the King of Israel!” They pressed around Jesus and accompanied Him on His ride into Jerusalem in such large numbers that the Pharisees said, "Look, the world has gone after him.”
But what was the point? Just a few days later, many of these same people would form another crowd that would shout, "Crucify Him!" So, was the Triumphal Entry of Jesus into Jerusalem as the King of Israel a failure? Does the rejection of Good Friday make the triumph of Palm Sunday an empty, meaningless exercise? No! It's quite the opposite, in fact! 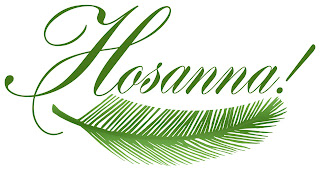 Everything that happened on Palm Sunday during the Triumphal Entry happened just as Jesus intended, to communicate the real truth of why He had come to Jerusalem. He rode on a donkey because He was the king bringing peace to the people. He was coming to be Himself the peace between God and His people. The people shouted "Hosanna!", which means "Save now!" They wanted salvation from Rome, but Jesus came to save them from their deeper bondage to sin and death. They hailed Him as their king, and they were right. He is the King of kings and Lord of lords.
We are conditioned to think of glory and rejection, triumph and defeat, victory and death as absolute and irreconcilable opposites. But later, when Jesus spoke with Phillip and Andrew, He said, "The hour has come for the Son of Man to be glorified. Truly, truly, I say to you, unless a grain of wheat falls into the earth and dies, it remains alone; but if it dies, it bears much fruit." The hour for the glory of the Son of Man has come, and that was the hour of His death. For only in death would He bear much fruit.
We need to learn that God defines failure differently than we do. We need to learn that God defines glory differently, too. If we would seek success by worldly standards, we will lose with God every time. But if we seek to lose our lives in magnificent defeat for His sake, we will bear much fruit! To God be the glory!
Prayer Based on Psalm 40:
By Your grace, I waited patiently for You, Lord;
You inclined to me and heard my cry.
You drew me up from the pit of destruction,
out of the miry bog of my sin and shame, guilt and condemnation,
and set my feet upon the Rock of Christ,
making my steps secure.
You put a new song in my mouth,
a song of praise to You, my God.
Lord, may many see and fear,
and put their trust in You for what You have done for me.

May I be blessed as a man who makes
You, the Lord, my trust always.
May I never turn to the proud,
to those who go astray after a lie!
You have multiplied, O Lord my God,
your wondrous deeds and Your thoughts toward us;
none can compare with You!
I will proclaim and tell of them,
yet they are more than can be told.

In sacrifice and offering You have not delighted,
but You have sent Your Son, who came as a willing servant.
Burnt offering and sin offering
You have not required.
Then Christ said, “Behold, I have come;
in the scroll of the book it is written of Me:
I delight to do Your will, O my God;
Your law is within My heart.
Father, I praise You for the perfect obedience
and willing sacrifice of Your Son.

Let me always tell the glad news of deliverance
in the great congregation;
Let me never restrain my lips from speaking Your glory and grace,
as You will grant by Your grace, O Lord.
Let me not hide Your deliverance within my heart;
Let me always speak of Your faithfulness and Your salvation;
Let me never conceal Your steadfast love and Your faithfulness
from Your great congregation.

As for You, O Lord, You will not restrain
Your mercy from me;
Your steadfast love and Your faithfulness will
ever preserve me!
For evils have encompassed me
beyond number;
my iniquities have overtaken me,
and I cannot see;
they are more than the hairs of my head;
my heart fails me.
Be pleased, O Lord, to deliver me!
O Lord, make haste to help me!
Let those be put to shame and disappointed altogether
who seek to snatch away my life;
let those be turned back and brought to dishonor
who delight in my hurt!
Let those be appalled because of their shame
who say to me, “Aha, Aha!”

But may all who seek You
rejoice and be glad in You;
may those who love Your salvation
say continually, “Great is the Lord!”
As for me, I am poor and needy,
but You, Lord, take thought for me.
You are my help and my deliverer;
do not delay, O my God!
Posted by Jason A. Van Bemmel at 10:47 PM