The native people showed us unusual kindness, for they kindled a fire and welcomed us all, because it had begun to rain and was cold. When Paul had gathered a bundle of sticks and put them on the fire, a viper came out because of the heat and fastened on his hand. When the native people saw the creature hanging from his hand, they said to one another, “No doubt this man is a murderer. Though he has escaped from the sea, Justice has not allowed him to live.” - Acts 28:2-4, ESV


How Do the Blessings of Common Grace Prepare the Way for the Gospel?

As soon as Paul and his shipmates are shipwrecked on Malta, they are greeted by a pleasant surprise: The natives on Malta, who are non-Greek-speaking primitives, greet them with great hospitality. They welcome the shipwrecked men with kindness and kindle a fire for them to help dry them and keep them warm. Then, after the viper grips onto Paul's hand, the natives show a basic understanding of divine justice. How did these non-Christian, pagan people get these virtues? 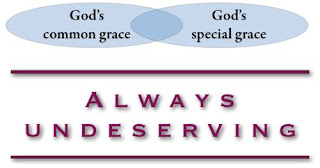 Sometimes Christians can distort our concepts of sin and righteousness in a way that denies the operation of common grace. Common grace refers to the grace of God which operates among all people, believers and unbelievers. This common grace is responsible for all kinds of good things which believers and unbelievers enjoy. Jesus called us as believers to imitate God's common grace when He said, "Love your enemies and pray for those who persecute you, so that you may be sons of your Father who is in heaven. For he makes his sun rise on the evil and on the good, and sends rain on the just and on the unjust." (Matthew 5:44-45, ESV)

Common grace certainly includes all general blessings of good weather, health, food, water, etc., but it also includes measures of civic righteousness. Paul told believers to submit to human governments in Romans 13, describing non-Christians Roman government in these terms: "For there is no authority except from God, and those that exist have been instituted by God. Therefore whoever resists the authorities resists what God has appointed, and those who resist will incur judgment." (Rom. 13:1-2, ESV)   How can secular governments provide justice? Only by God's common grace.

In today's passage, we see another aspect of common grace. These Maltan natives had hospitality and a sense of justice that prompted them to welcome these shipwrecked men and also to recognize that Paul must be someone special if he was able to shake off a viper that had bitten his hand without being hurt. Their decency and sense of justice prepared them to be able to receive Paul and to be touched by God's hand through Paul's ministry among them. So, common grace not only provides material blessings and civic justice but also prepares people to receive Gospel ministry.

Heavenly Father, we thank You for all of Your grace, for saving grace and for common grace. Thank You for blessing people who do not deserve it. Thank You most of all for preparing us to hear Your Gospel and to receive and rest upon Your Son for salvation. We thank You in His name, Amen.

Whoever works his land will have plenty of bread,
but he who follows worthless pursuits will have plenty of poverty.
A faithful man will abound with blessings,
but whoever hastens to be rich will not go unpunished.
Heavenly Father, by Your goodness, we enjoy great blessings in this life.
Give us diligence in our work and good fruit from our labor.

To show partiality is not good,
but for a piece of bread a man will do wrong.
A stingy man hastens after wealth
and does not know that poverty will come upon him.
Whoever rebukes a man will afterward find more favor
than he who flatters with his tongue.
Father, keep us from the sins of greed, favoritism and flattery.
May we treat people with kindness and never with disdain or with self-serving flattery,
and may we never love material possessions more than people.

Whoever robs his father or his mother
and says, “That is no transgression,”
is a companion to a man who destroys.
A greedy man stirs up strife,
but the one who trusts in the Lord will be enriched.
Lord, may our hearts never be captured by money or possessions,
and may we trust in You alone for our security.

Whoever trusts in his own mind is a fool,
but he who walks in wisdom will be delivered.
Whoever gives to the poor will not want,
but he who hides his eyes will get many a curse.
When the wicked rise, people hide themselves,
but when they perish, the righteous increase.
Father, give us humility and wisdom,
keeping us from self-reliance and foolishness.
May we be generous and caring toward the poor,
and may we be a blessing to our neighbors as we serve them in Your name. Amen.
Posted by Jason A. Van Bemmel at 10:57 PM