For Jesus has been counted worthy of more glory than Moses—as much more glory as the builder of a house has more honor than the house itself. . . Now Moses was faithful in all God's house as a servant, to testify to the things that were to be spoken later, but Christ is faithful over God's house as a son. - Hebrews 3:3, 1-6, ESV 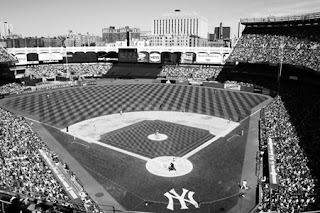 One measure of greatness: Yankee Stadium was called "The House that Ruth Built." One of the most iconic and celebrated venues in the history of sports, so famous that when the Yankees needed a new stadium, they built it as a replica of the old one, Yankee Stadium stood for 85 years, from 1923 to 2008. Why was it built? It was built for Babe Ruth. on the strength of his fame, to accommodate the larger crowds who came to see him play. 74,200 people came on opening day in 1923, shattering the previous attendance record of 42,000. It was "The House That Ruth Built." No other baseball player in history is on the same level as Babe Ruth, and in many ways, this singular fact proves it.

Among the servants of God throughout the history of God's people, Moses was remarkable. He was the most humble man in the world, according to Numbers 12:3, and was the most faithful servant of God, according to Numbers 12:7 ("He is faithful in all my house."). Moses was used by God to send judgments on Egypt. led the people of God out of bondage, gave the people God's Law, established the Tabernacle worship, met with God face-to-face, led armies into battle and interceded for God's people in prayer repeatedly. He was a remarkable servant of God, without equal among his fellow servants.

The mistake some Jewish believers were making in the First Century was comparing Moses to Jesus. Some of them were tempted to abandon following Jesus and return to following Moses. They were tired of being ostracized from their Jewish communities and facing coming persecution for their faith. Moses and Jesus were both prophets who gave God's Word to God's people, so why not just go back to Moses? After all, hadn't God said Moses was faithful in all His house?

It is always a mistake to compare Jesus to any other religious leader. He is in a category by Himself. In this way, the opening story about Babe Ruth applies to Moses but is really inapplicable when it comes to Jesus. As great as Babe Ruth was, he was just a baseball player, like other baseball players. You can compare him to others. He is the greatest, but he is the greatest among his peers, among others of his kind. Jesus is in a category of One, Himself - the only God-Man, the only Builder of God's House, the only risen and exalted Word of God incarnate.

So, the only question left for you to answer is simple and vital: Are you in His house?
Posted by Jason A. Van Bemmel at 11:11 PM

Email ThisBlogThis!Share to TwitterShare to FacebookShare to Pinterest
Labels: Hebrews