Get the full reading plan
What Does it Mean to be Great in God's Kingdom?
But Jesus called them to him and said, “You know that the rulers of the Gentiles lord it over them, and their great ones exercise authority over them. It shall not be so among you. But whoever would be great among you must be your servant, and whoever would be first among you must be your slave, even as the Son of Man came not to be served but to serve, and to give his life as a ransom for many.” - Matthew 20:25-28, ESV

Moms have always had high hopes for their children. They generally tend to have a high view of their children's gifts and abilities, and they think the world should see how wonderful they already know their children to be. James and John had a mom who thought her two boys should be at the right-hand and left-hand of Jesus in His kingdom.

Jesus did not rebuke this mom but instead turned his attention to the boys themselves. He asked them a single "job interview" question: "Are you able to drink the cup I am to drink?" James and John had no idea what Jesus was saying. They had no clue what the cup of suffering was that Jesus had to drink. But they answered anyway: "We are able."

Greatness and ambition are celebrated in our culture and those who push themselves ahead and rise to the top are praised and rewarded. But Jesus' kingdom is not like our modern American culture. He doesn't value ambitious, pushy, proud self-promoters. Now here's the sad and sobering reality: The church has known Jesus' perspective for 2,000 years, but we are still so prone to doing church according to the world's standards and not according to Jesus' own definition of greatness.

Jesus could not have been more clear: "It shall not be so among you. But whoever would be great among you must be your servant, and whoever would be first among you must be your slave, even as the Son of Man came not to be served but to serve, and to give his life as a ransom for many." Yet our culture of celebrity pastors and mega-church super-stardom and highly paid conference speakers and theologically hollow, self-promoting best-selling books all shout of a church culture shaped more by the world than by the teachings of Jesus.

Jesus didn't just tell His disciples what greatness looks like. He also showed them. Right after teaching them the definition of greatness in His kingdom, Jesus stopped, took pity on two blind men, touched them and healed them. This was the pattern for so much of Jesus' life: He was willing to stop what He was doing, to have compassion on others, to reach out and touch them, and to heal them. This is not the pattern of an ambitious self-promoter, but is the pattern of One who came to give His life as a ransom for many.

Prayer Based on Psalm 48:

Great are You, O Lord, and greatly to be praised
in Your church, the city of our God!
Your holy mountain, beautiful in elevation,
is the joy of all the earth,
Mount Zion, in the far north,
the city of the great King.
Within Your church and among Your people,
You have made Yourself known as a fortress.

As we have heard, so have we seen
in the congregation of the redeemed, the city of the Lord of hosts,
in the church of our God,
which You have established forever,
where Your Son reigns over Your people. 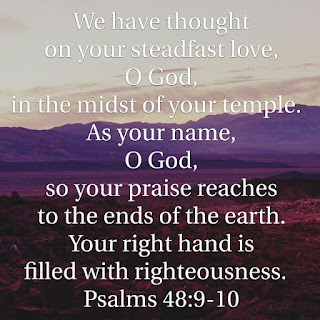 We have thought on Your steadfast love, O God,
in the midst of Your living temple, Your gathered people, worshiping You.
As Your name, O God,
so Your praise reaches to the ends of the earth.
Your right hand, Jesus, is filled with righteousness, which You give to Your people.
Let Mount Zion be glad!
Let the daughters of Judah rejoice
because of Your judgments!
Show us Your church,
Let us listen to her testimonies,
Show how You have redeemed and gathered a people for Yourself,
Give is the grace to consider well how Your Gospel saves,
that we may tell the next generation
that You are God,
our God forever and ever.
You will guide us forever.

Through Jesus our Savior and to the praise of His name, we pray, Amen.
Posted by Jason A. Van Bemmel at 7:32 AM