How Do We Know Jesus Rose from the Dead?

"And they found the stone rolled away from the tomb, but when they went in they did not find the body of the Lord Jesus." - Luke 24:2-3, ESV

The Christian faith hangs on a singular historical event: the resurrection of Jesus of Nazareth from the dead. In one of the earliest documents of the Christian faith, 1 Corinthians (likely dated before 57 AD), the Apostle Paul makes it clear that the truth and confidence of the Christian faith hangs on the resurrection of Jesus from the dead. If Jesus rose from the dead, then we can have confidence that what He taught about Himself and what His disciples taught others about Him is true and reliable. But if He did not rise from the dead, then "our preaching is in vain and your faith is in vain" and "we are of all people most to be pitied." (see 1 Corinthians 15:14-18, ESV)

So, how can we know that Jesus rose from the dead? We see several pieces of evidence and sources of confidence from today's text in Luke 24:

1. The disciples did not expect Jesus to rise from the dead. Why is this important? Well, if Jesus' disciples were fabricating the idea of the resurrection, they probably would not have depicted a scenario in which they were caught completely by surprise.

In fact, what we have in the Gospel accounts is not a flattering picture of the disciples at all: Even though Jesus told them three times that He would be crucified and would rise from the dead, they were crushed by His crucifixion, went into hiding after His death, disbelieved early reports of His resurrection and required Jesus to appear to them in person before they would believe Him. All-in-all, these facts do not make the disciples look like a clever conspiracy. It is more likely that the only thing which could have changed them from cowering in fear to standing in faith was Jesus' actual resurrection. 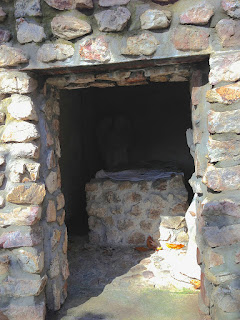 2. The first recorded witnesses to the resurrection were women. No one concocting a believable hoax in the ancient world would have had women positioned as the first eye-witnesses. In fact, women were so easily dismissed in the ancient world that the disciples though the report of these women "seemed to them an idle tale, and they did not believe them." The disciples were not gullible men who were quick to believe whatever they were told. Far from it, their initial reaction was that of dismissive skeptics.

3. Even when Peter first saw the empty tomb, that alone did not convince him. "Peter rose and ran to the tomb; stooping and looking in, he saw the linen cloths by themselves; and he went home marveling at what had happened." (v. 12)

4. The Scriptures testified to the death and resurrection of Jesus hundreds of years before Jesus was even born. When Jesus encountered the two men on the road to Emmaus, He did not immediately reveal Himself to them. Instead, He took time to show them from the Scriptures, which pre-dated the birth of Jesus by ~400 - ~1500 years, that His death and resurrection had been foretold. Perhaps He took them to Isaiah 52-53 (700 BC) or to Psalm 22 (1000 BC).

5. Jesus presented Himself personally and unmistakably to His followers on multiple occasions. The Gospels record repeated times when Jesus showed Himself to His disciples in real, physical, undeniable ways. This is the only thing which could have and did change their hearts and minds. This was the confidence that took them into a hostile world, to the very people who had crucified Jesus, with the message that He was alive again.

We, too, can have the same confidence as the Apostles. We may not be eye-witnesses, but we have their testimony and the testimony of Scripture promises given centuries before. Together, these strengthen and uphold our faith with confident joy in our risen Savior who has defeated death and hell forever!

I praise You, O Lord!
I praise You with all my soul!
I will praise You, Lord, as long as I live;
I will sing praises to You, my God, while I have my being.

Let me never put my trust in princes,
in a son of man, in whom there is no salvation.
When his breath departs, he returns to the earth;
on that very day his plans perish.

Blessed is he whose help is You, O God of Jacob,
whose hope is in the Lord his God,
who made heaven and earth,
the sea, and all that is in them.
You keep faith forever;
You execute justice for the oppressed,
You give food to the hungry.

You, Lord, set the prisoners free;
You open the eyes of the blind.
You, Lord, lift up those who are bowed down;
You love the righteous, whom You have made righteousn by Your grace.
You watch over the sojourners;
You uphold the widow and the fatherless,
but the way of the wicked he brings to ruin.

The Lord will reign forever,
your God, O Zion, to all generations.
Praise the Lord!
Posted by Jason A. Van Bemmel at 8:37 PM