Get the full reading plan
What's the Difference Between Seeing and Seeing?
Then Simon Peter came, following him, and went into the tomb. He saw the linen cloths lying there, and the face cloth, which had been on Jesus' head, not lying with the linen cloths but folded up in a place by itself. Then the other disciple, who had reached the tomb first, also went in, and he saw and believed - John 20:6-18

If you're a man and you're married, then you've probably had the experience of being asked, "Do you see that?" and looking and wondering, What exactly am I supposed to see? If you're blessed to be a husband, then you know there is a big difference between seeing and seeing. You probably also know the difference between seeing and seeing from the other perspective if you're the parent of a teenager. You walk into their room and ask, "Do you see this?" and they stare blankly back at you and reply, "See what?" 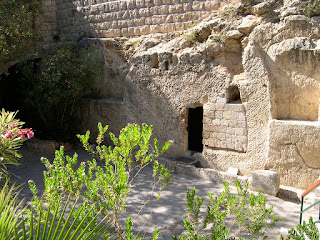 In English, this discussion is limited by the fact that we say seeing and seeing, saw and saw, using the same word but meaning two different things by it. Greek is different. Greek has several different words for seeing, and John uses three different verb here:

1. The first time (v. 5), when John saw the linen cloths, the word is blepo, which is perhaps the most basic word for seeing with the eye.

2. In the next verse (v. 6), when Peter enters and sees the linen cloths, the word is theoreo, which is a stronger verb, meaning to look and consider, to view attentively.

3. Finally, when John entered the tomb, we're told "he saw and believed." (v. 8) This time, the verb for saw is horao, which can mean to perceive or to pay heed. This is the verb that is used by Matthew to descibe the wise men seeing the star; it is a seeing with understanding. Thus, John "saw and believed." His seeing was with an understanding that led to faith.

In life, so much depends on really being able to see. May the Lord give us the grace to be able to see with understanding and to respond with faith, just as John did, believing with eyes of faith, before he saw the risen Lord and before he even fully understood the Scriptures. Lord, grant us that kind of sight!

Prayer Based on Psalm 89:

I will sing of the steadfast love of the Lord, forever;
with my mouth I will make known Your faithfulness to all generations.
For I said, “Steadfast love will be built up forever;
in the heavens You will establish Your faithfulness.”
You have said, “I have made a covenant with my chosen one;
I have sworn to David my servant:
‘I will establish your offspring forever,
and build your throne for all generations.’”
You have kept and fulfilled all of Your covenant promises in Christ,
the Great Son of David who lives and ruled forever!
Let the heavens praise Your wonders, O Lord,
Your faithfulness in the assembly of the holy ones!
For who in the skies can be compared You, O Lord?
Who among the heavenly beings is like the Lord,
a God greatly to be feared in the council of the holy ones,
and awesome above all who are around You?
O Lord God of hosts,
who is mighty as You are, O Lord,
with Your faithfulness all around You?
You rule the raging of the sea;
when its waves rise, You still them.
The heavens are Yours; the earth also is Yours;
the world and all that is in it, You have founded them.
The north and the south, You have created them;
Tabor and Hermon joyously praise Your name.
You have a mighty arm;
strong is your hand, high Your right hand,
Jesus our Savior and Lord, Your right hand forever!

Righteousness and justice are the foundation of Your throne;
steadfast love and faithfulness go before you.
Blessed are the people who who walk, O Lord, in the light of your face,
who exult in the name of Jesus all the day
and in Your righteousness are exalted.
For You are the glory of their strength;
by Your favor our horn is exalted.
For our shield belongs to the Lord,
our king to the Holy One of Israel.
But Your people are in trouble, O Lord,
Persecuted and harassed by enemies and suffering shame and disgrace.
How long, O Lord? Will You hide yourself forever?
How long will Your wrath burn like fire?
Remember how short our time is!
For what brief lives on earth You have created all the children of man!
What man can live and never see death?
Who can deliver his soul from the power of Sheol?
Only in Jesus is power over the grave!
Lord, where is Your steadfast love of old,
which by Your faithfulness You swore to David?
Your have fulfilled the vows You made to David in Your Son.
Now, remember, O Lord, how Your servants are mocked,
and how we bear the insults of all the many nations,
with which Your enemies mock, O Lord,
with which they mock the footsteps of Your anointed.
Redeem and rescue, to the praise of Your name!
Blessed be the Lord forever!
Amen and Amen.
Posted by Jason A. Van Bemmel at 7:54 PM