And when the Gentiles heard this, they began rejoicing and glorifying the word of the Lord, and as many as were appointed to eternal life believed. - Acts 13:48, ESV


Who Will Respond to the Gospel and Believe in Jesus?

As a pastor, it's interesting to see the reactions on people's faces while I'm preaching. I'm sometimes amazed how two different people can hear the same message and have two completely different reactions. Why do some people react to the Gospel so positively, while others react with strong disapproval?

In today's passage, we find Paul and Barnabas in the Synagogue at Pisidian Antioch on the next Sabbath, where they have been invited back to present the Gospel again. This time, massive crowds are filling the synagogue to overflow capacity. The Jewish leaders are filled with jealousy over the popularity of these new preachers and they begin to contradict Paul and Barnabas' message and also to insult them, reviling Paul.

One thing is clear from Paul's reaction to this mis-treatment: When anyone attacks, harrasses, contradicts or reviles the Gospel, they lose. The Gospel does not change, does not become untrue and does not wither in the face of criticism. Rather, the critics of the Gospel lose, since they "thrust it aside and judge [them]selves unworthy of eternal life." (v. 46) 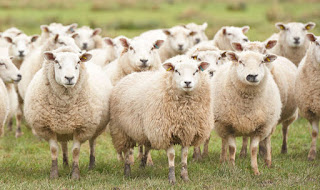 The wording of this verse reminds me of something Jesus said to the Pharisees in John 10:25-26: "The works that I do in my Father's name bear witness about me, but you do not believe because you are not among my sheep." (ESV)  Notice again that Jesus didn't say what we might expect. He didn't say, "You are not among my sheep because you do not believe." He said the exact opposite. Their lack of faith comes because they are not Jesus' sheep.

This truth is clearly taught repeatedly in the Bible, not only in John and Acts but in Romans, Ephesians and 1 Peter, too. When we understand and believe what God is telling us, it humbles us as believers and gives us great confidence at the same time. It humbles us to know that we were appointed by God to eternal life; we did not just believe in Jesus because we're smarter or better than unbelievers. We are also given great confidence because we know that our eternal life and our position in God's flock are not ultimately dependent on us. We're safe in the hands of Him who saved us by His grace and who will now keep us in that same grace.

Heavenly Father, Thank You for being so gracious to us, for saving us from our sin and drawing us to Christ. You are the giver of the gift of eternal life. We have received what You have graciously given. We rest in You and You alone. In Jesus' name, Amen.

It is better to be of a lowly spirit with the poor
than to divide the spoil with the proud.
Heavenly Father, keep us from treasuring the spoils of the world,
and give us content and thankful hearts, grateful for Your good gifts.

Whoever gives thought to the word will discover good,
and blessed is he who trusts in the Lord.
The wise of heart is called discerning,
and sweetness of speech increases persuasiveness.
Good sense is a fountain of life to him who has it,
but the instruction of fools is folly.
The heart of the wise makes his speech judicious
and adds persuasiveness to his lips.
Gracious words are like a honeycomb,
sweetness to the soul and health to the body.
Lord, You tell us how important our words are,
and we must confess how readily we sin with our words.
We have not given thought to the word as we should.
Our speech has not been marked by discernment and sweetness,
but too often we have spoken rashly and selfishly.
Please forgive us for our sinful and foolish words,
and give us gracious words and judicious speech,
that we may honor You and bless others.

There is a way that seems right to a man,
but its end is the way to death.
A worker's appetite works for him;
his mouth urges him on.
A worthless man plots evil,
and his speech is like a scorching fire.
Father, leep us from the presumption that sees our own ways as right,
and give us instead a humble dependence on You.
Let us not be worthless or driven by our appetites,
but let us walk in Your way and be led by Your Spirit.
In Jesus' name, Amen.
Posted by Jason A. Van Bemmel at 4:30 AM