I make it my ambition to preach the gospel, not where Christ has already been named, lest I build on someone else's foundation, but as it is written,

What drives you? Why do you get out of bed in the morning? Last night, I watched a special about a famous stand-up comedian, and he said all he wanted was for people to like his sense of humor, to laugh at his jokes. He said that was all the approval he ever needed. During his boxing career, Muhammed Ali was obviously driven by the desire to have people consider him the greatest of all time. More recently, Floyd Mayweather wanted to be able to retire 50-0 and very wealthy, even if he had to box a famous non-boxer to achieve those goals.

So, what drives you? In today's passage, we see what drove the Apostle Paul. He said, "I make it my ambition to preach the gospel, not where Christ has already been named." He was driven by a consuming desire to take the name of Jesus Christ to those who had not heard of Him, so they could become worshipers of Jesus, too. He wanted to see Jesus praised and glorified by more and more peoples in the world. 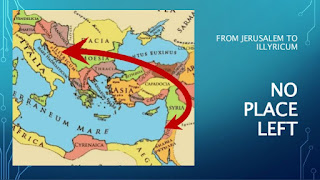 Paul's driving ambition had already led him to take the gospel all around the Eastern Mediterranean. He was able to say, "from Jerusalem and all the way around to Illyricum I have fulfilled the ministry of the gospel of Christ" This was a massive amount of territory covered by Paul in his relentless gospel-preaching and church-planting missionary work. Now, he was writing to Rome because he wanted them to be the new Antioch, to use them as a new base of operations to take the Gospel to Spain. (We'll see more on that desire tomorrow.)

So, what drives you? Are you trying to climb the ladder in your company, to become an executive or a key leader? Are you seeking to become well known and have many followers on social media? Do you just want people to like you or to think you're funny?

The Westminster Shorter Catechism famously says that our chief end is to glorify God and enjoy Him forever. How does your ambition fit into God's chief purpose for your life, His eternal glory and your eternal joy? Are you aiming high enough in your ambitions, seeking that which will bring maximum glory to God and true satisfaction to your soul in Him?