Are God's Plans Always Better Than Ours?

When therefore I have completed this and have delivered to them what has been collected, I will leave for Spain by way of you. I know that when I come to you I will come in the fullness of the blessing of Christ. - Romans 15:28-29, ESV

I was 17 years old when I graduated from high school, and I had great plans. I was going to become a nurse, then go to Southeastern Baptist Theological Seminary and then be a medical missionary pastor. A few funny things happened along the way to the fulfillment of my plans: I wasn't any good at nursing. I became a Presbyterian, attended Reformed Theological Seminary and stayed in America. I'm now 43 years old, and when I think about my family, our community, my church and God's faithfulness to me despite my sin, I would not dream of trading His plans for mine. 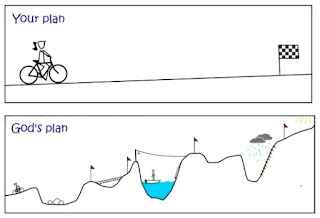 Have you seen God change your plans radically from where you thought you were going in life? Maybe you're in a place where you can't yet see how His ways have been better than your ways. Maybe you're confused or even deeply hurt by His providence. If so, today's passage holds great hope and encouragement.

Paul is revealing his plans to the Romans. They seem very reasonable and God-honoring. He is taking a collection from the Greek-speaking churches to the saints in Jerusalem, who have been suffering under a famine. Once he has completed delivering this support of the famine-stricken churches, Paul then plans to make his way to Rome and spend some time with the Roman Christians. From Rome, he hopes to be helped by the Roman churches on a missionary endeavor to Spain.

It sounds like a great plan, and everything goes according to plan for Paul - except that nothing really goes quite according to plan. Paul does go to Jerusalem. He delivers the gift. After that, he ends up on Rome - in chains, as a Roman prisoner. Paul asks the Romans to pray for him to be delivered from the unbelievers in Judea. God answers these prayers, by having Paul arrested and imprisoned by the Roman authorities in Judea.

Paul would spend years in jail in Caesarea and then in Rome, unjustly accused of disloyalty to Rome. He could easily have whined and complained that God had not blessed his wonderful plans. God would never again have a missionary as faithful, persistent and fruitful as the Apostle Paul. So, why did God let him sit in prison and only end up in Rome in chains? Because this was the best way for God to be glorified in Paul's life.

From prison, Paul wrote Philippians, the epistle of joy. It had special power, bring written from prison, especially when Paul said, "Rejoice in the Lord always!" and "I have learned in whatever situation I am to be content." He also wrote Ephesians, Colossians and Philemon from prison. Perhaps God needed to sideline him from active church-planting work to draw forth wonderful theology and encouragement from him.

In the end, Paul did end up in Rome. Even in chains, he was still an encouragement to the Roman Christians. He would end up being released from his chains, and he would be helped to Spain by the Roman church. In Spain, he would retire to the Spanish Riviera and live out his advanced years playing bocce - not! He would end up back in prison in Rome and would be beheaded for his testimony of faith in the Lord Jesus. Yet God would be glorified through it all!

What matters in life, that we get what we want or that God gets glory? In the end, your answer to that question will determine whether you will think God's plans are always better than yours or not.

Here's a video that will help us think about His plans vs. our plans -