Jews from Asia, seeing him in the temple, stirred up the whole crowd and laid hands on him, crying out, “Men of Israel, help! This is the man who is teaching everyone everywhere against the people and the law and this place. Moreover, he even brought Greeks into the temple and has defiled this holy place.” - Acts 21:27-28, ESV


Why Are Mobs So Dangerous and Senseless?

In today's reading, we see another mob being stirred up to violence and extreme reaction against the Apostle Paul. The book of Acts seems to be full of angry, senseless, foolish, violent mobs. And yet, what is reflected in the book of Acts is just a sad and common reality in human history: Mob violence is often as brutal as it is senseless. Why? 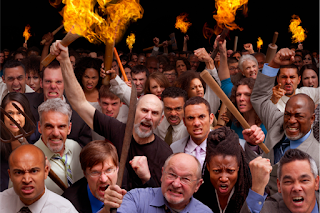 Mobs are often made up of groups of disgruntled people who are hanging around a public space with a general sense of anger at the world. Lots of people sadly go through life convinced that the world is really messed up, that they've been cheated, and that someone must be to blame. Beneath this anger is a deep and universal human realization of the truth that the world is indeed broken and full of injustice. What is misguided is the need to find a scapegoat, the eagerness to blame someone else for the world's problems.

A group of people in this condition are ripe for manipulation by someone who sounds confident and who appeals to the crowd's natural sense of outrage. Think about what these Jewish leaders from Asia Minor said: “Men of Israel, help! This is the man who is teaching everyone everywhere against the people and the law and this place. Moreover, he even brought Greeks into the temple and has defiled this holy place.” Was this true? No. Why was it so effective? Because in a mob mentality, outrage matters much more than truth.

The accusations of the Jewish leaders from Asia Minor had all the key ingredients for stirring up a mob: outrage, blind nationalism, a scapegoat and a call to action. The appeal was effective and the mob reacted just as they were supposed to: "Then all the city was stirred up, and the people ran together. They seized Paul and dragged him out of the temple, and at once the gates were shut." (v. 30)

This mob was going to kill Paul, but thankfully, "word came to the tribune of the cohort that all Jerusalem was in confusion. He at once took soldiers and centurions and ran down to them. And when they saw the tribune and the soldiers, they stopped beating Paul." (vv. 31-32) This is one good reason why we need lawful governing authorities, to protect us all from mob rule.

The psychology of the mob is simply a reflection of our fallen humanity. We demand our rights, are outraged when we think we don't get them, look for someone else to blame for our problems and then get angry when we feel like our complaints are not being heard. There is a little piece of the senseless mob inside of each of us, and we need God to save us from it.

Heavenly Father, give us eyes to see that we deserve nothing but Your judgment and we are treated far better than we deserve. Save us from self-pity, self-righteous anger and self-delusion, Make us an influence for truth and righteousness in Your world. In Jesus name, Amen.

Read these verse carefully, examine your hearts in the light of them, and pray in response to the Lord:

Do not rejoice when your enemy falls,
and let not your heart be glad when he stumbles,
lest the Lord see it and be displeased,
and turn away his anger from him.

Fret not yourself because of evildoers,
and be not envious of the wicked,
for the evil man has no future;
the lamp of the wicked will be put out.

My son, fear the Lord and the king,
and do not join with those who do otherwise,
for disaster will arise suddenly from them,
and who knows the ruin that will come from them both?
Posted by Jason A. Van Bemmel at 12:04 AM