“As I was on my way and drew near to Damascus, about noon a great light from heaven suddenly shone around me. And I fell to the ground and heard a voice saying to me, ‘Saul, Saul, why are you persecuting me?’ And I answered, ‘Who are you, Lord?’ And he said to me, ‘I am Jesus of Nazareth, whom you are persecuting.’ Now those who were with me saw the light but did not understand the voice of the one who was speaking to me. And I said, ‘What shall I do, Lord?’ And the Lord said to me, ‘Rise, and go into Damascus, and there you will be told all that is appointed for you to do.’ - Acts 22:6-10, ESV


What is the Value of Personal Testimony?

Yesterday, we looked at how Paul was able to get the attention of the Jerusalem mob by speaking to them in Hebrew and then giving his credentials in a way that got them to settle down and pay attention to him. Once he had their attention, Paul made the most of his opportunity by sharing his personal testimony of his encounter with Jesus. Rev. E.W. Moore was an Anglican pastor in the early 1900's who was an eye-witness of the Welsh revivals. Here's what he said about the value of personal testimony, using the Australian gold rush as an example:

Many years ago now, before the Australian goldfields were opened, a party of experts were sent up the country to explore the district and report on the probability of gold being, found there. They made their survey, sent in their report, gave it as their opinion that gold would be found, that there were "auriferous strata," etc., but somehow or other no one was greatly interested. Nobody disputed their conclusions, and nobody acted on them. But some time after, one market day, some shepherd lads came down to Melbourne from the bush with some lumps of yellow ore in their pockets. "Why," said those to whom they showed it, "that's gold! Where did you get it?" "Oh"! said they, "we got it up country; there's plenty of it up our way." Next morning there was a stampede — everyone that could raise a cart was off to the diggings. Now, my brother, you may not be able to preach, but does your life show that you have got the nuggets? - E. W. Moore

Now, you my not have a testimony as supernatural and amazing as that of the Apostle Paul, but if you know Jesus and He has changed your life, you have a testimony. Even if you've known Him all your life and have one of those "boring" testimonies of someone who has grown up in the faith, you still 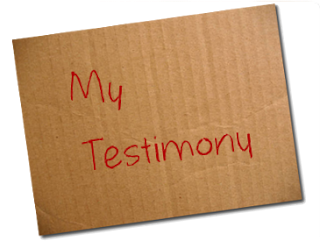 know what a difference Christ makes:


A personal testimony is something which every Christian can share and which is difficult for a non-believer to refute. For Paul, it was a wise choice for sharing with this mob. He could not engage them in extended reasoning from the Scriptures in that atmosphere, and he did not want to be argumentative. It was a great time for him to share his testimony. When was the last time you shared yours?

Heavenly Father, give us opportunities to share out testimonies with unbelievers. Give us courage and clarity to share our faith with those who need to know Jesus. In His name we pray, Amen.

I passed by the field of a sluggard,
by the vineyard of a man lacking sense,
and behold, it was all overgrown with thorns;
the ground was covered with nettles,
and its stone wall was broken down.
Then I saw and considered it;
I looked and received instruction.
A little sleep, a little slumber,
a little folding of the hands to rest,
and poverty will come upon you like a robber,

Heavenly Father, keep us from the lure and the danger of being sluggards. Give us diligent spirits and let us work hard for Your glory in all we do. In Jesus' name, Amen.
Posted by Jason A. Van Bemmel at 10:17 PM