Pontius Pilate washed his hands of Jesus. He declared Him innocent of treason and rebellion and said very clearly, "I find no guilt in him." (v. 6) Yet, cowardly, he decided to pacify the Jewish leadership and give them what they wanted - the death of Jesus.

Interestingly, once Pilate decides to give in to their demands, he then starts consistently referring to Jesus as the King of the Jews. When he presents Jesus to the crowd one final time, he says, “Behold your King!” He then asks them, “Shall I crucify your King?” To this question, the chief priests, of all people, answered, “We have no king but Caesar.” In the end, when Jesus was hung on the cross, Pilate ordered an inscription be put on the cross reading, "Jesus of Nazareth, King of the Jews." 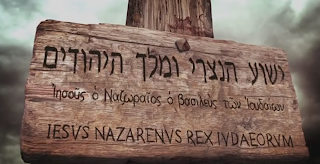 So, what was Pilate thinking? Why did He do this? Did he suddenly change his mind and think Jesus was trying to lead a Jewish uprising against Rome? No, it doesn't seem like he did. Rather, it seems like Pilate was trying to lay the blame for Jesus' death at the feet of the Jews, while at the same time mocking them for having their king crucified.

But there's a more important reason why "King of the Jews" was written on the cross: Because it was true and God wanted it proclaimed there. Jesus was the promised Messiah, the Son of David. He was the King of the Jews. And yet, the sign was written in Aramaic, Latin and Greek, all of the major languages of the people and of the empire. This was to signify that Jesus' kingship had worldwide significance.

Is Jesus your King? Did He hang there for your sins? Will you adore Him at the foot of that shameful and yet glorious cross?

Prayer Based on Psalm 82:

O God, You have taken Your place in the divine council;
in the midst of the mighty ones, You hold judgment,
speaking to the powerful of the world, asking:
“How long will you judge unjustly
and show partiality to the wicked?
Give justice to the weak and the fatherless;
maintain the right of the afflicted and the destitute.
Rescue the weak and the needy;
deliver them from the hand of the wicked.”

Lord, they have neither knowledge nor understanding,
the rulers of the world walk about in darkness;
all the foundations of the earth are shaken.

Lord, You have said to the world's rulers, “You are gods, mighty ones,
sons of the Most High, all of you;
nevertheless, like men you shall die,
and fall like any prince.”

Arise, O God, judge the earth;
for You shall inherit all the nations!
Posted by Jason A. Van Bemmel at 9:52 PM