Why Did the Disciples Go Fishing After the Resurrection?
Simon Peter, Thomas (called the Twin), Nathanael of Cana in Galilee, the sons of Zebedee, and two others of his disciples were together. Simon Peter said to them, “I am going fishing.” They said to him, “We will go with you.” They went out and got into the boat, but that night they caught nothing.
- John 21:2-3, ESV
Some time after the resurrection of Jesus, seven of Jesus' eleven disciples were together in Galilee. We might quickly ask ourselves why they are in Galilee and not still in Jerusalem, but they are from Galilee and it would be natural for them to return home after some time. Then Peter declares to the others that he is going fishing, and the rest of them declare that they will go with him. So they all go fishing together. Why? 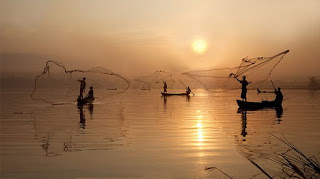 Many people have chastised the disciples for this decision. They have said that the disciples should have stayed in Jerusalem and waited for the Holy Spirit to come. They have said that they should have started proclaiming Jesus' resurrection. After all, how can anyone just go back home and go back to his former way of life after having seen Jesus conquer death and rise again? This all seems so out of place, right?
Well, maybe. But Matthew Henry offers a defense of the disciples' actions. He suggests that by going fishing, the disciples were resolved not to sit around being idle and that they were seeking to earn a living for themselves and not to be a burden to others.

John Calvin agrees with Henry, saying
That Peter gave his attention to fishing, ought not to be regarded as inconsistent with his office. By breathing on him, Jesus had ordained him to be an Apostle, as we saw a little before; but he abstained from the exercise of the apostleship for a short time, till he should be clothed with new power. For he had not yet been enjoined to appear in public for the discharge of his office of teaching, but had only been reminded of his future calling, that he and the others might understand that they had not in vain been chosen from the beginning. Meanwhile, they do what they were accustomed to do, and what belonged to men in private life.
Whether these disciples were misguided or acting perfectly naturally, when we examine this event in their lives in the light of God's providence, we can see another angle: Whatever their motivations might have been,God had ordained that they should return to fishing again so that Jesus could reveal Himself to them again in an unmistakable way.
God kept them from catching any fish all night so that they would be in the same state of disappointment they had been in three years earlier. Just as Jesus had done years before, so now He gifts them with a miraculous haul of fish. This time, we're told the exact number of the fish caught, which some have speculated might be the number of nations/ethnic groups in the known world then. Supposedly, this is to be a reminder of their calling to take the Gospel to the nations. This seems to be mere speculation. It seems more reasonable to propose that the large number was to make it clear how miraculous and abundant the haul of fish was.
Jesus graciously and powerfully revealed Himself to His disciples so they would have no doubt that it really was Him. He showed them His great power over the fish that they might trust Him and depend upon Him. He was also preparing them for His re-commissioning of Peter. Jesus had first called Peter to fish for men in these exact same circumstances. Now, He is going to restore him and renew the call.
Prayer Based on Psalm 98:
Let us sing unto You, Lord, a new song,
for You have done marvelous things!
Your right hand and Your holy arm, the Lord Jesus,
have worked salvation for You and Your people.
You have made known Your salvation;
You have revealed Your righteousness in the sight of the nations.
You have remembered Your steadfast love and faithfulness
to the house of Israel.
All the ends of the earth have seen
Your salvation, O God.

Let the sea roar, and all that fills it;
the world and those who dwell in it!
Let the rivers clap their hands;
let the hills sing for joy together
before You, Lord, for You come
to judge the earth.
You will judge the world with righteousness,
and the peoples with equity.
We long for and look forward to the glorious day
when You will reign openly and powerfully over all things.
We rejoice in our great salvation,
and we eagerly await the day when our salvation
and Your kingdom victory will be final, complete,
world-wide and fully consummated!
And so we pray, come quickly, Lord Jesus, Amen!
Posted by Jason A. Van Bemmel at 8:49 AM