Why is it that you have contrived this deed in your heart? You have not lied to man but to God.” When Ananias heard these words, he fell down and breathed his last. - Acts 5:4-5, ESV


How Serious is Sin?

Today's passage is one of the most shocking and disturbing stories for us in the whole of Scripture. It's difficult for us to accept for one simple reason: We don't really take sin very seriously.

Ananias and Sapphira had conspired together to lie to the Lord and to the apostles, to try to impress people and make people think they were more godly and impressive than they really were. Now, we would probably try to spin this and say, "Well, they sold a piece of property and gave a significant part of it to the church." Peter's words to Ananias clearly indicated that they were under no obligation from the church to either sell the property or to give all of the proceeds to the church. Their sin was not in what they did but in how they lied about what they did.

What's so serious about lying? We think of that as a "no big deal" kind of sin. After all, it's not like they committed adultery or murder, right? They were just trying to impress people, right? That kind of thinking is so far from right that we need to repent of ever beginning to think that way about sin.

All sin is a direct assault against the character and rule of God. As those who bear God's image and who are given responibility over His creation, our sin is deadly serious. Imagine if the American ambassador to Germany started lying to the German government about America's plans and promises. That's a hint of how serious our sin is. God is truth and He hates lies as an attack on His character and His creation. 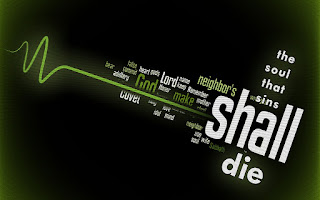 The seriousness of sin is reflected in God's warnings about it:


All sin is also serious because it is all done in the presence of God, who is everywhere and sees everything. What would we think of a husband who committed adultery right in front of his wife? What would we think of a drug dealer who came into the court and started selling drugs right in front of the judge? We know God is everywhere and sees everything, yet we choose to sin in His presence anyway.

The really surprising thing is not that God sometimes strikes people with the immediate consequences for their rebellion, but that He so often does not. His mercy to forebear and extend life to billions of people day after day, in the face of so much sin, is the really shocking aspect of His character. Our sin- all of our sin- deserves death. Our sin - all of our sin - is a direct assault on the goodness, holiness, justice and mercy of God done in the direct presence of God. We need to hate it as such, that by God's grace we may truly forsake it.

Heavenly Father, You are holy, holy, holy. Your eyes are too pure to look upon sin with approval. No sin can abide in Your presence. Your justice requires that all sin be punished. Jesus became sin for us and died in our place so that our sin can all be forgiven. Let us not respond to this good news with a flippant callousness toward our sin. Grant us true repentance. In Jesus' name and for the sake of Your glory we ask, Amen.

Father, we confess our tendency too be sluggards. You give us good work to do and You call us to work at it with all of our heart, working as unto You. We confess that we often find excuses to be lazy, neglectful, selfish, proud or careless in our work. Forgive our sin and change our hearts, O Lord. In Jesus' name we ask, Amen.
Posted by Jason A. Van Bemmel at 4:30 AM