But they cried out with a loud voice and stopped their ears and rushed together at him. Then they cast him out of the city and stoned him. And the witnesses laid down their garments at the feet of a young man named Saul. And as they were stoning Stephen, he called out, “Lord Jesus, receive my spirit.” And falling to his knees he cried out with a loud voice, “Lord, do not hold this sin against them.” And when he had said this, he fell asleep. - Acts 7:57-60, ESV


How Can the Death of an Innocent Man Glorify God? 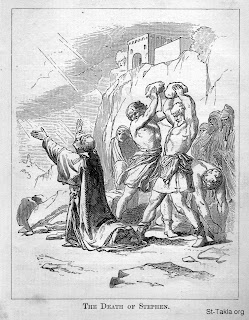 The death of Stephen is one of the most compelling accounts in Scripture. Stephen's speech before the Sanhedrin was so knowledgeable and passionate, but the council responded not with contrite hearts and repentance but with blind rage. The anger of the council, the obvious innocence of Stephen and the gross injustice of his death combine to create a heart-wrenching scene. Why would God not deliver Stephen from this death? How could God allow His faithful disciple to be so mistreated? How could God be glorified in such a brutal death of such an innocent man?

What becomes obvious as we read the account more closely is that God is working out a greater purpose through Stephen's death. First of all, Stephen himself loses nothing, though he is unjustly condemned and brutally killed. He commits himself to the Lord, saying, "Lord Jesus, receive my spirit." God gives him a glorious vision of Jesus, standing at the right hand of God, ready to receive this faithful witness. Even Luke's final words "he fell asleep" indicate the truth: Stephen did not truly die. He was trusting in the One who said, "I am the resurrection and the life. Whoever believes in me, though he die, yet shall he live." (John 11:25)

Secondly, it is obvious to all of these men who commit this act that Stephen is not just an innocent man, but that he is dying just like Jesus. Stephen echoes two of the final sayings of Jesus from the cross as he is dying. He commits his spirit to the Lord and he forgives his enemies who are stoning him. In this way, he glorifies Christ by bringing back to the minds of his murderers the death of the Savior on the cross.

Finally, in the midst of this brutal scene, we are told of a young man named Saul. Stephen's killers threw their coats down at Saul's feet for safekeeping. This young man would soon be sent out with letters from this council authorizing him to arrest and imprison followers of Jesus. But Jesus would stop him in his tracks. Jesus would change his life forever, and Jesus would send him out to be an even more effective witness than Stephen had been.

We must never doubt that God is always at work, always ordering things in the best and wisest way. A senseless act of violence like the death of Stephen may seem to be the most unlikely place for God to be working. With hindsight, we can see that God was very present and very much in control as He welcomed His child home. Can we trust Him in times when our lives seem out of control?

A wise son makes a glad father,
so make us wise that we may make You glad.
Treasures gained by wickedness do not profit,
so give us the righteousness of Christ that delivers us from death.
You, O Lord, do not let the righteous go hungry,
but You do thwart the craving of the wicked,
so guard our hearts from wickedness and give us faith to trust in Your care.

A slack hand causes poverty,
but the hand of the diligent makes rich.
He who gathers in summer is a prudent son,
but he who sleeps in harvest is a son who brings shame.
So, Lord, make us diligent in the use of our time and energy.
May we be prudent with the resources entrusted to our care.

The wise of heart will receive commandments,
so grant us teachable hearts, ready to receive wisdom.
Whoever walks in integrity walks securely,
so Lord, keep us from crooked ways.
The mouth of the righteous is a fountain of life,
so make our words truthful and full of grace,
that we may bless those who hear us.