On an appointed day Herod put on his royal robes, took his seat upon the throne, and delivered an oration to them. And the people were shouting, “The voice of a god, and not of a man!” Immediately an angel of the Lord struck him down, because he did not give God the glory, and he was eaten by worms and breathed his last.


How Should We View the Rulers of this World?

Herod is not a very popular baby name these days. According to the Social Security Administration, "Herod is not in the top 1000 names for any year of birth beginning with 1900." (Interestingly, Adolf was in the top 1000 almost every year until 1928, and then it dropped out of the top 1000.) By contrast, almost all of the names of the disciples have remained relatively popular for centuries. James, John, Peter, Matthew, Paul and even Bartholomew, Nathanael and Thomas have been pretty consistently popular for a very long time. Only Judas fell out of favor very quickly and has never recovered.

Why am I pondering the popularity of baby names? Because it reminds me of the difference between the people the world thinks are important and the people who really matter in the eyes of God. In today's passage, we see that the people of Tyre and Sidon greatly feared Herod. They were eager to appease his anger because they depended on him for food. So they were happy to praise and glorify him, and he was all-too-happy to receive their praise and adoration. 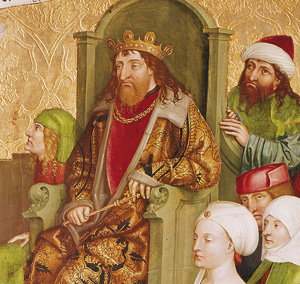 This is the same Herod who had put James to death by the sword and had arrested Peter and kept him in prison. This whole chapter is framed as a contrast between the reign of King Herod and the reign of King Jesus, the living and eternal Word of God. We see in Herod injustice and arrogance. By contrast, we see in the disciples of Jesus humility, prayer and perseverance in faith.

The world would say that the show-down between Herod and these poor and obscure disciples of a Jewish rabbi is not even a contest. Herod wins, hands-down, in the eyes of the world. Yet this brief chapter ends with Herod being worm food and the word of God increasing and multiplying.

This chapter has such rich, vital lessons for us. How much weight do we place on earthly political power? How willing are we to compromise our faith in Christ and our faithfulness to His word in order to pursue and retain some measure of political power of favor in the eyes of those who wield such power. The people who sat under Herod's rule were willing to acclaim him as a god in order to keep his favor. What are we willing to compromise?

We have been given the highest citizenship and the most noble calling. We've been adopted into the best family and have access to the highest throne in the universe. Why would we settle for petty, passing political power?

Heavenly Father, You have adopted us into Your family and have made us citizens of Your eternal kingdom. You have called us to be ambassadors for Your kingdom to this fallen world. Give us the wisdom to forsake the fleeting pleasures of sin and the siren's song of worldly power for the better calling of Your heavenly kingdom. In Jesus' name, Amen.

"There is a Higher Throne" by Keith and Kristyn Getty:

A wise son makes a glad father,
but a foolish man despises his mother.
Folly is a joy to him who lacks sense,
but a man of understanding walks straight ahead.
Lord, if we're honest, we know how close foolishness is to our hearts, lips and lives each day.
We need You to save us from folly and train us in wisdom and godliness.

Without counsel plans fail,
but with many advisers they succeed.
To make an apt answer is a joy to a man,
and a word in season, how good it is!
The path of life leads upward for the prudent,
that he may turn away from Sheol beneath.
Father, let us seek Your wise counsel in Your word,
and the wise counsel of those who walk in faithfulness with You.
Give us the apt answer, the word in due season, to bless others,
and lead us in the path of life that Jesus walked for us.

The Lord tears down the house of the proud
but maintains the widow's boundaries.
The thoughts of the wicked are an abomination to the Lord,
but gracious words are pure.
Whoever is greedy for unjust gain troubles his own household,
but he who hates bribes will live.
Lord, pride and greed come from the same unrigheous root of selfishness,
thinking too highly of ourselves and wanting too much for ourselves.
Lord, may our thoughts and our words relfect Your grace at work within us,
and not the arrogance and covetousness of our selfish sinful natures,
for only in Your ways will we find peace and life.
In Jesus' name, Amen.
Posted by Jason A. Van Bemmel at 4:30 AM