But when it was day, the magistrates sent the police, saying, “Let those men go.” And the jailer reported these words to Paul, saying, “The magistrates have sent to let you go. Therefore come out now and go in peace.” But Paul said to them, “They have beaten us publicly, uncondemned, men who are Roman citizens, and have thrown us into prison; and do they now throw us out secretly? No! Let them come themselves and take us out.” The police reported these words to the magistrates, and they were afraid when they heard that they were Roman citizens. So they came and apologized to them.


Is it Okay for Us to Claim our Rights?

Paul and Silas had been illegally and unjustly arrested, beaten and imprisoned. They had passed up an opportunity to escape when God sent an earthquake to loosen their bonds and open the prison. Instead of escaping, they shared the pure and simple Gospel with the jailer and rejoiced with him and his family in their salvation. After Paul and Silas had baptized the Philippian jailer and eaten with him and his family, they came back to jail and were re-imprisoned. 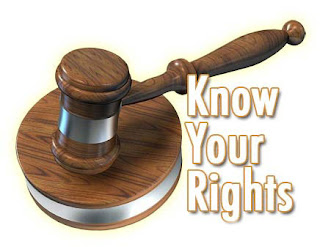 In the light of morning, cooler heads prevailed within the justice system and the magistrates ordered the police to release Paul and Silas. However, Paul claimed his rights as a Roman citizen who had been treated unjustly and demanded that the magistrates come and apologize and release them themselves. Was it right for Paul to claim his citizenship rights? Why didn't he just leave, like they were asking him to do?

Paul had several good reasons for doing what he did:

3. Paul and Silas wanted the freedom to be able to meet with the believers and encourage them before leaving town. They knew they were going to have to leave the city, but asserting their rights as citizens bought them some time. "So they went out of the prison and visited Lydia. And when they had seen the brothers, they encouraged them and departed." (v. 40)

So, is it right for us to claim our rights as citizens? Yes, if we're doing so for the right reasons. We can't just be selfish or use our rights to cover up our own wrongdoing, because that dishonors Christ. We can assert our rights in order to prevent or expose injustice, to protect other believers from persecution and the advance the ministry of the Gospel. In these cases, it is best for us to take advantage of the rights we have for the greater good of justice and the kingdom of God.

Heavenly Father, we thank You that we do have rights established by You and protected by governments. Give us wisdom to discern when we should exercise our rights to promote the cause of justice and serve Your kingdom. In Jesus' name, Amen.

Whoever goes about slandering reveals secrets;
therefore do not associate with a simple babbler.
If one curses his father or his mother,
his lamp will be put out in utter darkness.
Heavenly Father, Thank You for the gift of speech.
You warn us against the danger of slander and cursing
because speech is a powerful gift, to bless or curse.
Take control over our tongues and empower us to honor You and bless others.

An inheritance gained hastily in the beginning
will not be blessed in the end.
Do not say, “I will repay evil”;
wait for the Lord, and he will deliver you.
Unequal weights are an abomination to the Lord,
and false scales are not good.
A man's steps are from the Lord;
how then can man understand his way?
Father, give us the faith to trust in You,
that contentment to accept what You give with gratitude,
the willingness to wait for You and Your deliverance,
and the joy to know we are always being guided by Your loving hand.
In Jesus' name, Amen.
Posted by Jason A. Van Bemmel at 4:30 AM