"These men who have turned the world upside down have come here also." - Acts 17:6, ESV


How Does the Gospel Turn the World Upside Down?

The reception Paul and Silas received in Thessalonica has become quite familiar by this point in the Acts. Thessalonica had a synagogue, unlike Philippi, so Paul and Silas went into the synagogue and reasoned from the Scriptures on three consecutive Sabbath days. Some of the Jewish men became convinced and professed faith in Jesus. Even more of the God-fearing Greeks, who would be on the periphery of the synagogue, came to faith in Christ, along with several of the leading women. The Gospel was once again bearing fruit and being used by God to bring people to eternal life.

However, the bulk of the Jewish men did not embrace Christ. The more Paul reasoned, the more they got angry and dug in their heels in opposition. As happened in so many other cities, those who opposed the Gospel message organized a mob and "set the city in an uproar." (v. 5) This time, though, two things were different: 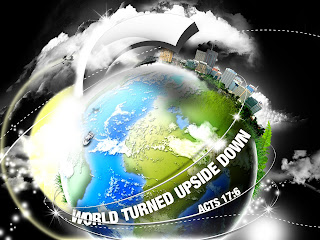 1. The mob could not get their hands on Paul and Silas, so they arrested their hosts instead, including Jason.

2. The accusation against Paul and Silas was that they were men "who have turned the world upside down."

The Gospel is powerful and disruptive on many levels. Trolling around on social media and comment threads will show you very clearly that the Gospel generates a level of hostility unmatched by any other religion. The reason is simple: The Gospel violates all human expectations and upends all human systems of self-salvation or self-glory.

The Gospel strips us of all claims to self-righteousness. For the Jewish men, circumcision and their Jewish national citizenship distinguished them as the most righteous group of people on the planet. For all people, religions based on self-effort are considered safe and normal, but religions based on grace alone are a threat to all of our performance-based thinking, and the truth that Jesus is Lord disrupts our personal kingdom-building.

But those who have eyes to see the glory of grace and the wonder of Christ's kingdom see the benefits of the Gospel clearly and rejoice. The Gospel strips us of our self-righteousness only to clothe us in the perfect righteousness in Christ. The Gospel humbles us so that God may exalt us to His right hand. We lose our pathetic temporary kingdoms and gain His eternal kingdom.

Heavenly Father, thank You for opening our eyes that we may see Your glory in the face of Christ Jesus. Thank You for taking away all of our claims to any righteousness of our own and clothing us in Your perfect righteousness instead. Give us the grace to proclaim the Gospel and joyfully accept whatever reception comes. In Jesus' name, Amen.

It is a snare to say rashly, “It is holy,”
and to reflect only after making vows.
A wise king winnows the wicked
and drives the wheel over them.
The spirit of man is the lamp of the Lord,
searching all his innermost parts.
Steadfast love and faithfulness preserve the king,
and by steadfast love his throne is upheld.
The glory of young men is their strength,
but the splendor of old men is their gray hair.
Blows that wound cleanse away evil;
strokes make clean the innermost parts.

Heavenly Father, we need Your Holy Spirit to apply the perfect righteousness of Christ to our souls, that we may be careful and not rash, that we may walk in steadfast love and faithfulness, that we may be steady in the face of evil and may be used by Your to bring healing and peace. In Jesus' name, Amen.
Posted by Jason A. Van Bemmel at 11:32 PM