As Paul was about to be brought into the barracks, he said to the tribune, “May I say something to you?” And he said, “Do you know Greek? - Acts 21:37, ESV

Paul, standing on the steps, motioned with his hand to the people. And when there was a great hush, he addressed them in the Hebrew language, saying:

“Brothers and fathers, hear the defense that I now make before you.”

And when they heard that he was addressing them in the Hebrew language, they became even more quiet. - Acts 21:40 - 22:2, ESV

What is the Value of Cultural Engagement?

Most Americans speak only one language, while many other people in the world speak 2-3 languages. As Americans who speak only English, we are typically comfortable in only one culture, our own. More accurately, our current media and technology landscape has divided our English-speaking culture into dozens of discreet sub-cultures, broken up by generation, ethnicity, education-level, religious affiliation and geography. We don't watch the same television shows, listen to same music, read the same books, enjoy the same foods or speak the same language. 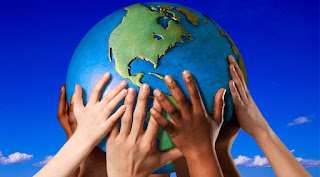 What is the value of bridging the cultural gaps and learning to speak other cultural "languages"? Well, on one level, doing so simply helps us fulfill the second great commandment by learning how to love our neighbors as ourselves. On another level, as we see with the Apostle Paul in today's passage, cultural literacy can help us gain an audience, when we connect with people in a language they understand.

Paul first surprises the Roman tribune who is taking him away from the crowds by speaking to him in Greek. But Paul knows more than just the actual Greek language; he also evidently knows the cultural values and priorities of a Roman soldier. He appeals to the Roman tribune by telling him that he is "a citizen of no obscure city," a reference to Paul's Roman citizenship. Paul knew this would raise his status in the eyes of the tribune. He used this to gain an opportunity to speak to the crowd.

Speaking to the crowd in Greek and making reference to his Roman citizenship would have been a very bad idea. That would have reinforced the anger the mob already felt toward him. Instead, Paul turns and addresses the crowd in Hebrew. This hushes the crowd and immediately gets their full attention. They had heard that Paul hated Jews and Jerusalem and was working to undermine Judaism in the world. Speaking in Hebrew was the perfect way to gain this audience.

As with the Roman tribune, though, Paul did more than just speak the Hebrew language; he also spoke to the Hebrew culture. He told them:

I am a Jew, born in Tarsus in Cilicia, but brought up in this city, educated at the feet of Gamaliel according to the strict manner of the law of our fathers, being zealous for God as all of you are this day. I persecuted this Way to the death, binding and delivering to prison both men and women, as the high priest and the whole council of elders can bear me witness. (21:3-5, ESV)

This was the perfect resume to dispel the vicious rumors swirling about Paul and to ensure that the crowd would listen to what Paul had to say. He referenced his birth, his education and his former way of life. He even called upon the highest authorities present - the high priest and the Sanhedrin council - to verify his claims.

Of course, gaining an audience doesn't guarantee that the audience will agree with your message. But at least the message you have will be heard. We need to be willing to do the work necessary to learn how to connect with people in their language, connecting to their values, so we can bring them the Gospel and be heard.

Heavenly Father, You have called us to be ambassadors for Christ to our fallen and needy world. Good ambassadors study the culture they are sent to engage, so as to not give offense and to ensure that the message they carry will be received clearly. Give us the wisdom and discernment to be faithful and loving ambassadors for Christ. May the Gospel never be obscured by our own arrogance, callousness or cultural ignorance. In Jesus' name, Amen.

These also are sayings of the wise.

Partiality in judging is not good.
Whoever says to the wicked, “You are in the right,”
will be cursed by peoples, abhorred by nations,
but those who rebuke the wicked will have delight,
and a good blessing will come upon them.
Whoever gives an honest answer
kisses the lips.
Father, it is hard for us to speak the truth when it is not welcome,
and confronting in love those who are doing wrong
is one of the hardest things You call us to do.
Give us the courage by Your Holy Spirit to speak the truth,
giving an honest answer and blessing those who hear.

Prepare your work outside;
get everything ready for yourself in the field,
and after that build your house.
Father, give us the diligence and wisdom to work hard and well,
doing our work for Your glory.

Be not a witness against your neighbor without cause,
and do not deceive with your lips.
Do not say, “I will do to him as he has done to me;
I will pay the man back for what he has done.”
Lord, it is so easy for us to give in to the desire to get even,
to treat others they way they've treated us,
and not the way You call us to treat them, with integrity and love.
Give us Your Spirit to fill us, control us and to love others well.
In Jesus' name, Amen.
Posted by Jason A. Van Bemmel at 4:30 AM