Then he called two of the centurions and said, “Get ready two hundred soldiers, with seventy horsemen and two hundred spearmen to go as far as Caesarea at the third hour of the night. Also provide mounts for Paul to ride and bring him safely to Felix the governor.” - Acts 23:23-24, ESV


What is the Responsibility of Government toward the Church? 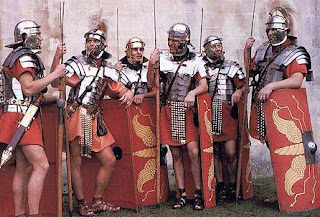 All governments have the responsibility to protect innocent people, especially their own citizens. Paul lays out the responsibilities of government in Romans 13:1-7, and we will look at that passage in greater detail when we get to it in our journey through Acts and Romans. For today, we will consider what responsibility the government has toward the church. In today's passage, we see the Roman tribune acting in an exemplary manner toward Paul in a time of great need.

We can answer the question of what special consideration the government should extend to the church in a single word: none. Christians should be treated just like other citizens by the government, and churches should granted the same status as other non-profit religious organizations. The state should not grant special privileges to the church, but neither should it penalize, punish or restrict the church.

Notice also that when the tribune sees the need to act, he acts decisively and effectively. He will leave no opportunity for the conspirators to attack Paul. Knowing Paul is threatened by 40 determined conspirators, he sends Paul with 470 soldiers and puts him on horseback. He also sends a letter to Felix the governor explaining to him the situation so that justice can be administered fairly and the proper protections and protocols implemented.

Government has a vital role in God's providential care for all people. It's role is not a theological one but a judicial and administrative one, to protect the rights and safety of all citizens. May we support government in its role and not ask it to do what God has not called it to do.

Heavenly Father, thank You for the gift of good government. We pray that You would give our government leaders wisdom and discernment, that they may protect and serve the rights and freedoms of all citizens. In Jesus' name, Amen.

Like snow in summer or rain in harvest,
so honor is not fitting for a fool.
Like a sparrow in its flitting, like a swallow in its flying,
a curse that is causeless does not alight.
A whip for the horse, a bridle for the donkey,
and a rod for the back of fools.
Answer not a fool according to his folly,
lest you be like him yourself.
Answer a fool according to his folly,
lest he be wise in his own eyes.
Whoever sends a message by the hand of a fool
cuts off his own feet and drinks violence.

Heavenly Father, You have harsh words and stern warnings against fools. Keep our hearts and lives far from foolishness. Anchor us in Your word, guide us by Your Spirit, grant us Your wisdom and give us the grace to honor You with our lives. In Jesus' name, Amen.
Posted by Jason A. Van Bemmel at 8:30 PM